The rules are also available for download in .pdf format.

Each player has a protagonist, a single woman of marriageable age. Your goal is for her to marry a desirable suitor, a man of good character and social standing. 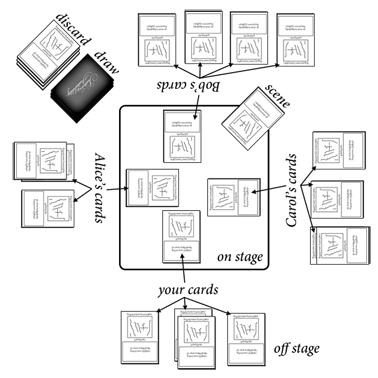 Cards not in play can be:

When you have a card in play, it can be:

Your cards on the table (not including cards in your hand) are the ones you have. Make sure to keep your cards facing you so you can tell which cards you have, and which cards other players have. 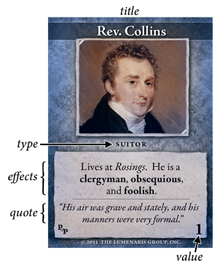 There are 8 types of cards in Suitors & Suitability:

Most cards have a quote from the book right after the effect text. The quote is just for enjoyment — it has no in-game effect.

Some cards have a number in their lower right-hand corner. This is the card’s value at the end of the game.

Start by taking the protagonists out of the deck. Each player chooses a protagonist; any that aren’t chosen are out of the game. The rest of the cards make up the draw stack; shuffle it and place it face down on the table. Each player draws a hand of five cards from the draw stack. Choose a player to go first. After a player’s turn, play proceeds to the left.

On your turn, you go through three phases:

During the play phase, you may play any number of cards from your hand. Each card has its own effects, so read the card to see what it does.

For example, let’s say Alice plays Vile Slander, but you don’t want her to. Wrath of de Bourgh is a reaction that can thwart any card being played. So if you have Wrath, you can play it as a reaction to Vile Slander being played to prevent its effects from happening. Both cards then go to the discard stack.

If two cards’ effects conflict with each other, resolve them according to these two rules:

A few cards cause your turn to end. When this happens, you can’t play any more cards, but your discard and draw phases still happen as usual.

Once you have no more cards you’d like to play, discard as many cards as you like — or none, if you want to keep all the ones you have.

If you have fewer than 5 cards in your hand, draw until you have five. When the draw stack runs out, shuffle the discard stack and flip it over as the new draw stack, then continue drawing cards as needed.

After you’ve collected points, your turn ends, and your protagonist and suitor are out of the game. Dismiss any other cards on them. You may still play cards, but you may not earn any additional points. Once all protagonists are married, or there are no more suitors to marry, the game is done.

back to Suitors & Suitability